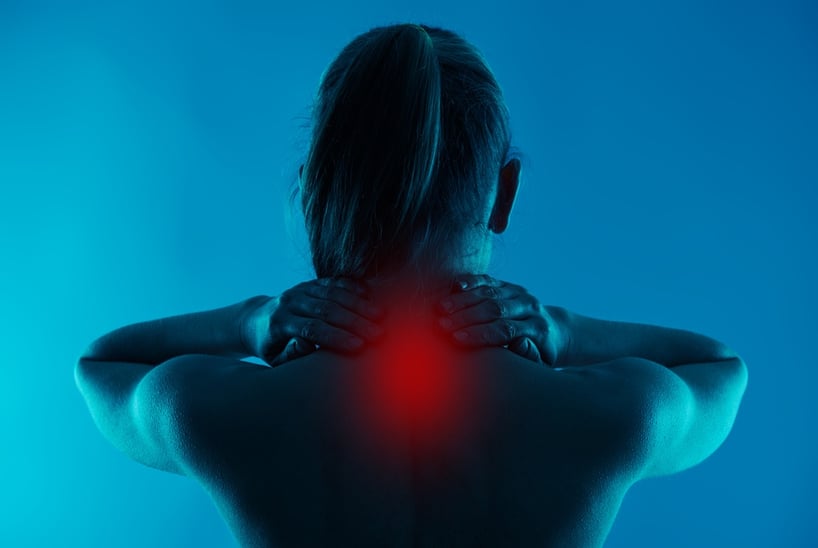 Anyone who has endured neck pains well understands the truth in the phrase, “what a pain in the neck!” By definition, the old cliché describes someone or something that is annoying, persistent, or irritating—a perfect description for pain that hits with every little motion of your head, including looking to the side, turning to back out of a parking spot, or simply nodding.

However, if your discomfort lasts longer than three months, or is accompanied by other symptoms such as weakness, numbness, and difficulty walking, you may be looking at far more than just a pain in the neck. You may be suffering from Chronic Neck Pain, a potentially serious condition that may require surgery to correct.

The Anatomy of the Neck

The neck is part of the spine, a stacked, interconnected column of 33 roughly disc-shaped bones (vertebra) that provides the 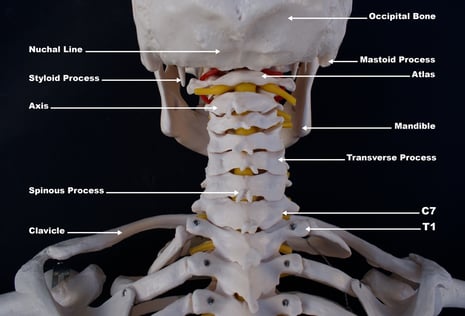 •  The neck comprises the spine’s first seven vertebrae, together making up a section called the cervical spine. The topmost vertebra, called C-1, connects directly to the base of the skull and uniquely allows for head rotation.

•  In between each vertebra lies a disc of connective tissue, filled with a jelly-like substance. Discs provide cushioning and spacing, as well as helping to ensure the spine is aligned properly.

•  Nearly every pair of vertebrae is connected by a pair of tiny facet joints, very similar to those found in knees, shoulders, and fingers, and located deep inside the spine.

•  Each vertebra features several holes (neural foramina) through which the spinal cord and spinal nerve roots thread their way en route to the rest of the body.

The cervical spine’s bones serve as anchors for all of the soft tissues of the neck, including the muscles, tendons, and ligaments that allow for its mobility and flexibility.

Collectively, all these intra-neck structures support the heavy, awkward ball of the human head, which typically weighs in at approximately eleven pounds. Your neck is also part of your body’s shock-absorbing system, allowing your head to be somewhat physically isolated from the body in the case of an impact or collision. The purpose of this is to minimize the possibility of a concussion, which results if the brain impacts the hard inner surface of the skull.

Should a blow to the head occur, the neck allows the skull to “give” in nearly every direction, lessening the severity of the movement. Similarly, in the case of an impact to the body, the neck allows the head “float” for an instant, reducing the energy that must inevitably travel up to skull.

Neck pains may be classified in the following ways:

•  Stiffness: Difficulty in turning the head

•  Sharp/Stabbing: Like being jabbed with a pointy object in a specific location

•  Dull/Sore/Tender: Pain throughout through a general area

•  Radiating: Pain that feels as if it is pulsing or moving in a regular wave, up into the head or down into the shoulders, arms, or fingers

In addition to neck pain, additional symptoms are sometimes associated with serious neck pain, including:

•  tingling and numbness that stretches like a radiating pain

•  loss of control over one’s bladder or bowels

Most pains in the neck are not caused by annoying family members or mischievous neighborhood children (despite the many popular comic strips that show otherwise!), but by overuse or overextension. Specifically:

•  Strains of neck muscles or tendons

Typical ways to overextend or overuse one’s neck include the following:

•  Sleeping with your head in the wrong position. A regular night’s sleep can be treacherous for your neck. Without consciousness, you can easily sleep the entire night with your head slipped off of your pillow or unknowingly scrunched on your side, or even with your head hanging off the side of the mattress. The result: an overextended cervical spine, causing a muscle strain or a ligament sprain. Pillows can be considered specialized sleeping tools to ensure your head remains in a properly “neutral” position while you are asleep.

•  Activities requiring holding the head in an unusual position for a long time. Neck strains and sprains can be caused by recreational activities such as stargazing, using your shoulder to hold a phone to your ear, or looking up at an air show or trapeze artists.

•  Bad posture. This can be much more serious than sitting properly at dinner or looking confident when you walk. Many, 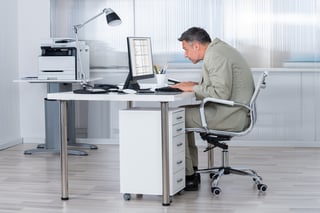 many, many everyday aspects of modern life result in our holding our heads in awkward, unnatural positions for hours at a time. Examples include driving, watching television, texting while walking, reading a book, gardening, and many more. Poor posture forces the neck structures to work much harder than they are designed for, ending up in overuse injuries, and sometimes permanent distortion or disfigurement of the spine.

•  Repetitive motions. Exercise, sports, dance, etc. require repetition for mastery. Beginners are particularly susceptible to neck injuries, since the entire body must adjust to new motions, some never before performed.

•  Falls and collisions. The neck’s ability to somewhat isolate the head from impacts to the body often comes at a price. While the neck’s flexibility may prevent a concussion from occurring, it may result in contusions to the muscles, strains of the tendons, and sprains of the ligaments.

•  Whiplash. Typically occurring in a rear-end car collision, whiplash injuries are caused by the head and neck being suddenly snapped forward, and then immediately backward, with much force.

While these pains in the neck may be unpleasant, they are generally classified medically as “minor.” Most of these types of pains will disappear within a few days or a few weeks, as the soft tissues in the neck enjoy a good supply of blood, which promotes faster healing.

A pain in the neck that lasts longer than three months may indicate a more serious cause than a strain or sprain. Long-term persistent neck pain could mean problems with nerves, discs, vertebrae, or the tiny facet joints located within the spine. Depending on the cause, what starts as simple neck pain could spread into the face, shoulder, even throughout the whole body.

Injuries, overuse, and aging are the most common causes of long-term neck pain. The following serious conditions may result:

•  Cervical Herniated Disc. This condition occurs when one or more of the discs layered between each vertebra become torn, allowing the disc’s viscous inner layer (nucleus pulposus) to leak out. Excruciating pain may result when the now-distorted disc presses against, or causes inflammation to, a cervical nerve threading its way through its designated holes in each vertebra.

•  Cervical Degenerative Disc Disease. Over a normal lifetime, it is completely natural for the discs to lose hydration, thickness, and cushioning abilities. However, a disc that has degenerated too far may case the same problems as a herniated disc, including pinching spinal nerves, or placing undue stress on the tiny facet joints of the vertebrae that could result in arthritis.

•  Cervical Osteoarthritis/Spondylosis (aka Neck Arthritis). Remember the little facet joints buried deep within the vertebrae? Just like a knee or elbow joint, they are faced with a layer of tough cartilage that allows for smooth movement. If this cartridge wears down, or is damaged by a significant blow to the neck, the resulting grinding between the bones of the vertebrae may cause inflammation, bone spurs, and nerve pinching as the tiny spaces within the vertebrae for neural passages become squeezed shut.

•  Cervical Spinal Stenosis. The entire spinal canal may become narrowed by degeneration among some or all 33 vertebrae in the spinal column. Bone spurs, herniated discs, inflammation, and swelling may combine to compress the spinal cord, a large nerve bundle that runs contiguously through every vertebra and connects directly to the brain. If the compression is bad enough to cause weakness and coordination problems in the limbs, the condition is known as myelopathy. Spinal stenosis has become well-known due to its appearance in several famous athletes, including former World-Series winning outfielder Lenny Dykstra of the Philadelphia Phillies, whose career was ended by the condition; and David Wright, All-Star third baseman for the New York Mets, whose career is now in jeopardy after he was diagnosed with the condition in 2015.

•  Cervical Foraminal Stenosis. Just as the vertebral hole for the spinal cord may become narrowed by bone spurs, the smaller holes (foramina) in each vertebra through with spinal nerves run may also become narrowed due to a herniated disc or bone spur.

If you are experiencing chronic neck pain that you worry may require treatment, a visit to your doctor or an orthopedist at Coastal Orthopedics in Coprus Christi can help you get a diagnosis.

Request an appoint by clicking the button below!