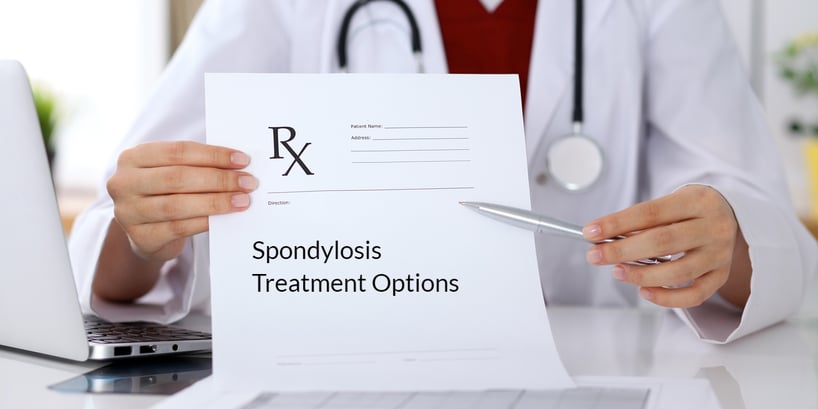 The term spondylosis (also called degenerative spondylosis) is not used to describe a specific problem with the spine, but rather an overall condition. Broadly speaking, a diagnosis of spondylosis means that some components of the spine are wearing down through normal, everyday use. This places spondylosis more into the category of “mechanical wear and tear,” and not that of disease or injury.

The spine is made up of a sandwiched stack of bony vertebrae and tough, flexible discs, connected by tiny facet joints and ligaments. All of these pieces are subject to showing signs of spondylosis.

For example, spinal discs lose water and proteins as they age, resulting in a loss of flexibility and an increased susceptibility to tears and herniations. Ligaments may tear, joints may crack, or vertebrae may grow bone spurs or grind against each other—again, all through the natural march of time and use.

Who can get spondylosis?

It is estimated that four out of five people (80%) over the age of 40 have some spinal degeneration. However, not everyone will require medical intervention to address their spondylosis.

Because it is a degenerative disease, there are no standard treatments or medications for spondylosis. However, the degraded discs and bones common to spondylosis may result in a number of conditions, most of which may be treated successfully.

Among the common problems caused by spondylosis are the following:

Treatments for the pain caused by spondylosis

No known medicine or procedure can reverse the degradation that characterizes spondylosis. Therefore, the treatment will be to treat the resulting conditions, the primary of which will be neck and back pain.

Medical professionals generally will recommend trying every treatment other than surgery. Studies have revealed that non-surgical treatments are statistically just as effective as surgery, plus the fact that many patients continue to suffer from chronic back pain even after undergoing a surgical procedure.


Although the vast majority of people over the age of 40 will have some measure of spondylosis in their spines, a large number of them will never feel any symptoms. Only a relative few will develop chronic pain that will require any kind of treatment, let alone serious, complicated procedures.